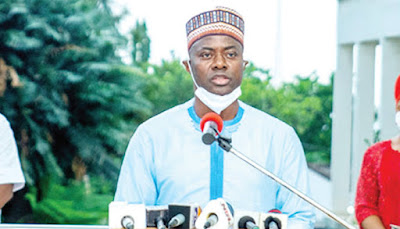 The Oyo State COVID-19 Task Force has shut down a tertiary institution following the discovery of a COVID-19 case.

This was confirmed in a statement issued on Saturday in Ibadan by Mr. Taiwo Adisa, the Chief Press Secretary to Gov. Seyi Makinde on behalf of the Task Force.

The statement noted that the Task Force has begun contact tracing while subjecting every possible contact to necessary surveillance.

The management of schools, workplaces and religious centres were also enjoined to ensure strict compliance with the established COVID-19 protocols.

READ also >>>  Teddy A celebrates wife, BamBam as she turns a year older

“The Emergency Operations Centre (EOC) of the Task Force has immediately ordered a lock-in of the affected tertiary institution to keep staff, students, and the general public safe.

“The EOC has also kick-started contact tracing while subjecting every possible contact to necessary surveillance,” the statement reads in part.

The Taskforce urged the public not to panic as all necessary protocols needed for effective management and psychosocial support had been instituted.

It called on the public to remain vigilant.

“It is important to note that these measures are not in any way punitive but are essentially aimed at protecting the lives of all and sundry from the menace of the virus, as well as prevent the spread of the virus within our communities.

“All hygienic practices associated with the preventive protocols are to be properly adhered to, while the utilization of safety devices, as well as social distancing, should also be upheld.

“In Oyo State, the slogan has been ‘Own Your Action (OYA)’’.

The task force urged the residents to take responsibility for their actions as such actions would have a collective impact on all.