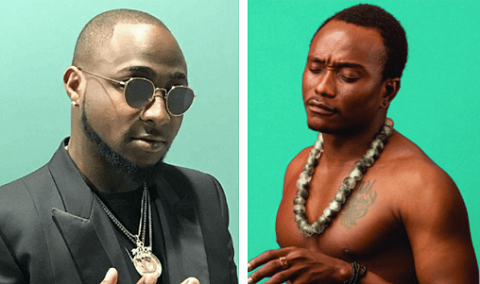 Oh dear! These releases of albums has been causing serious kasala o, lol.

So it started after Wizkid released his — Made In Lagos and people started comparing albums, lol. Some fans went ahead and asked Davido to quickly released this.

However the truth is, Davido is more attached with drama than any other musician, i mean let’s be honest, lol. So Davido dropped his album early hours of today, but hours to the D-Day, Burna Boy took a swipe at the Album and called it a Floppy Disk. Davido’s fans immediately took him to the cleaners, saying just FEM — a single track from Davido is better than the whole of Burna Boy’s album.

READ also >>>  Tacha also shares her n.u.d.e.s ahead of an impostor threatening to leak them

And now, Brymo is out speaking too. Brymo who dropped his 7th studio album in April — YELLOW– says it’s time people start separating most HYPED ALBUM from BEST ALBUM, saying his YELLOW album dropped in April is the best album of 2020.

In his tweet, he implied Davido’s album is juts hype. He even spoke about artistes hyping the record views and all, warning fans to be able to identity a real album from hype one.

We all know, Davido goes all out to promote his works. But who wouldn’t? He also has an egde, he is the most followed Nigerian celebrity online! Brymo’s tweet below…

Oh wait a minute… Davido’s fans also has some words for Brymo… ofcus they got the swipe and came for him. Some of the responses Brymo got below…

READ also >>>  Everton manager charged with misconduct by the FA

”Am i the only one who has no clue of any “yellow” album??

”Another failed artist trying to be relevant

”Actually, yellow is a good album but you can’t compete with the space of David and wiz. They have worked for thr hype 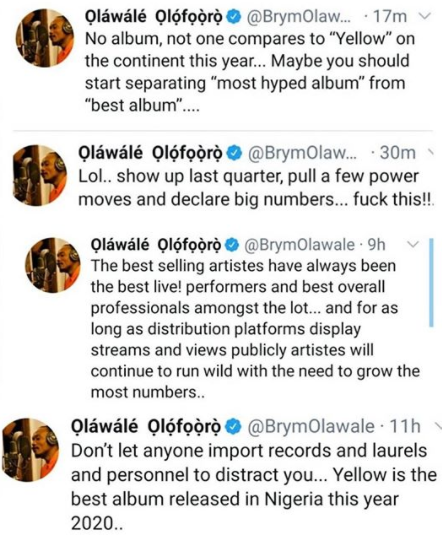